Coming out to play in extraordinary form, Cats euphoria returns to Melbourne 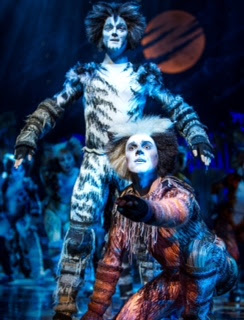 Andrew Lloyd-Webber's Cats is extraordinary entertainment and a plump song and dance spectacle based on T.S.Elliott's children's poems in Old Possum's Book of Practical Cats from 1939. Millions already know that but I'm a little perplexed by the euphoria.

Since the show's premiere in Melbourne in 1985 it returns for the fifth time in an updated revival from London's  Palladium Theatre by director Trevor Nunn and choreographer Gillian Lynne.

Those millions are well familiar with both the show and possibly the book. It has played in cities worldwide since its premiere in London's West End in 1981, cities that I've likely visited. But where have I been? I've never taken myself out of my way nor been taken along to see it. And unless those poems were read to me predating my earliest memories, I've had no contact with the book. I rather feel very much the odd one out, much like the supposed star of the show, Grizzabella, played by Aussie pop icon, Delta Goodrem.

But this sensational Melbourne cast show that everyone's a star in Cats. Every one of the Jellicles Cats gets a voice and a chance to illuminate the audience with their exciting lives on the night of the Jellicles Ball, when their leader and sage, Old Deuteronomy, chooses one amongst them to rise to The Heaviside Layer, to be reborn into a new Jellicles life. Grizzabella, the glamourpuss outcast, is the chosen. 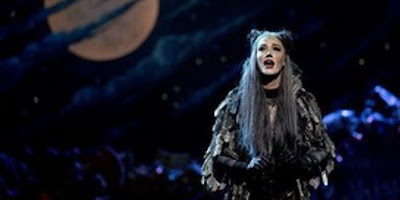 In her musical theatre stage debut, Delta Goodrem makes it look easy being the star of the show. There's little stage time to dilly-dally with, a song and a half to sing and a strut about the stage to look vulnerable, for which the high heels help in that regard. Sadly, the lighting doesn't. But it is Goodrem's gorgeously channeled voice, full of robust warmth and purity, that fires "Memories", a song I only ever associated with a long ago TV advertisement for long distance calling (before the ubiquitous mobile phone added FaceTime). Unashamedly, the poignancy of that commercial cemented a benchmark and Goodrem handled it with power and pride, but more could be milked of the pathos without overworking the vibrato. It didn't matter to a theatre full of fans who went berserk mid-song as her top register revved up and opened marvellously. It didn't matter because there was bucketloads of entertainment on tap to go with it.

Lashings of praise needs to be served to the rest of the cat cast who sport names far cuter and fancier than my old family pet Kitty, dance with astonishing style and gymnastic athleticism, then manage to sing almost as brilliantly while doing so. Associate director and choreographer Joanne Robinson has worked wonders with them.


Christopher Favaloro almost steals the show with precision perfect balletic splendour as the magical Mr Mistoffelees. Matt McFarlane's pulsating warmth of voice and diplomatic aplomb adds spring to Munkustrap. In Puccini-like amorous duet, Josh Piterman as Growltiger and Samantha Morley as Griddlebone elevate the moment in declaring "Abbiamo trovato l'amore" / "We have found love", and I wondered how many in the audience would take themselves off to an opera.

Sarah Kate Landy as Bombalurina and Amy Berrisford as Demeter stir up a stunningly saucy “Macavity" to the point just short of a strip-tease. The melodious and charming-voiced Ross Hannaford darts about full of boyish energy as the lean and likeable Skimbleshanks and Jason Wasley portrayed Old Deuteronomy in commanding style and tempered, charismatic voice. The list of talents goes on. 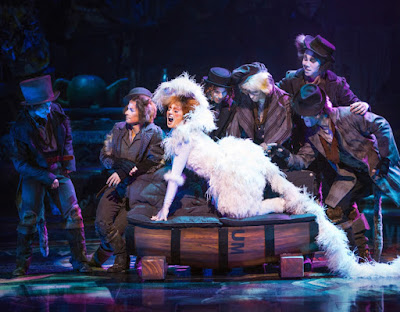 It's all so exhilarating and the tunes so catchy that, despite the generally fine diction, the verse feels tangled with the choreography, leaving little to ponder before being shoved along to the next scene. I should've read the book!


Though John Napier's single set design and its glowing full-moon backdrop remain static for the entire show, its heap of trash that arcs around and spills from the stage fringe renders a playground of superb monumentality that lends a little purpose to the feline characters within. The kaleidoscopic, kinetic lighting design keeps well-tuned to the dance routines but too much is lost in the low lux levels. Details shine, however, in the beautiful body-suited costumes with furry add-ons, especially when given the chance to see them up-close off-stage as the cats parade in the theatre aisles (where a seat is highly recommended and which services a quick exit).

Musical director Paul White created a musical soundscape as equally comforting and sumptuous as the theatre it fills on opening night. Nothing less than a live orchestra would satisfy me but the voiceover telling us so made it seem like a real privilege - perhaps it was because they were unseen (from my dress circle side seat). And the stereophonic sound quality rang with flawless delivery.

A magical, meow-wow festive finish was followed by a standing ovation. It won't be soon, but I have it in me to see Cats again. Only, in the end, when the poster star is lifted into the fly tower on an oversized tyre, I want to know this little book I was deprived of. I'll be sure to be well-versed in T.S. Elliot's seemingly delightful pussy poems next time.

Posted by OperaChaser at 3:46 AM