Barrie Kosky's daring Die Meistersinger von Nürnberg at Bayreuth Festival is controversial yet poignant, with the music having the final say: Limelight Review


In Richard Wagner’s glorious celebration of being German in Die Meistersinger von Nürnberg, Jewishness gets a beating and, in Barrie Kosky’s daring and inescapably controversial production at the Bayreuth Festival, Wagner is put on trial. It’s a juxtaposition and interpretation that zooms in on Wagner’s ideology on love, art and politics – which his work so completely embodied – to such an extent it makes Kosky’s 21st-century perspective not simply instructive, but shockingly poignant. 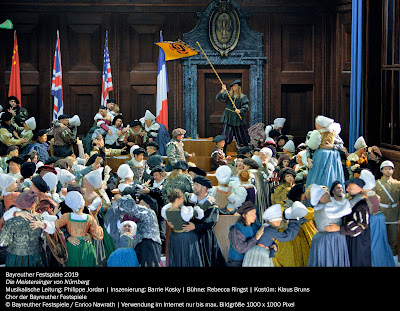 Kosky, who is Australian and of Jewish ancestry, never ignores the work’s mid-16th century setting of a song competition in which the prize is the hand in marriage to the young woman Eva, arranged by her father Veit Pogner. Kosky brings it to colourful and bucolic life in the hundreds of characters costumed in stunning Renaissance dress by Klaus Bruns. But he tells another story through Rebecca Ringst’s intelligently conceived set designs, beginning with the warm, wooden salon in Wagner’s Bayreuth oasis, Wahnfried. Then, there is Wagner on stage as the protagonist of the story, cobbler and mastersinger Hans Sachs. We also see Cosima Wagner as Eva and Franz Liszt (Cosima’s father) as Eva’s father Veit Pogner. More Wagner lookalikes appear. The young knight Walther, who is in love with Eva and she with him, is a younger Wagner.

Wagner-Sachs is the centre of prankish attention, both entertaining and annoying, in a room squeezed with the characters of a play-within-a-play, including the comic mastersingers who enter from under the piano lid. It’s when the Jewish conductor Hermann Levi enters – the man who conducted the premiere of Parsifal and was accused of having an affair with Cosima –that Wagner-Sachs’ tune changes. As he sets about humiliating him, you’re in no doubt this is the town clerk Beckmesser, the story’s derided character who can’t sing and has no hope in hell of snagging the beautiful Eva. 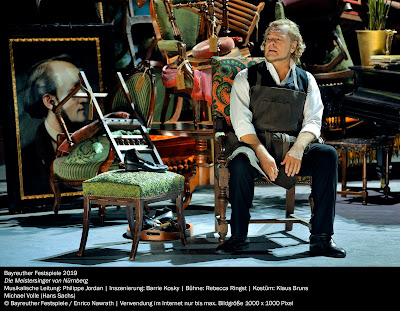 Kosky even seems to allow Act I’s comedy to wear thin in order to highlight a reason for the composer to eventually stand trial for his anti-Semitism. When Wahnfried is rolled rearward at the end of Act I, a large hall is revealed, a military officer stands guard and Wagner is alone. Act II unfolds around the piled up furnishings of Wagner’s salon and comes to a head -– quite literally an enormous inflated head of an evil-faced hooked-nose Jew with curls and skullcap ballooning on stage at the close of Act II. Beckmesser is beaten under a portrait of Wagner amongst the chaos that bursts forth in a horribly confronting act of discrimination.

Act III opens in the Nuremberg courtroom where the trials of those involved with the Third Reich famously took place. It was clear from the start that the dashing and instinctively creative Walther was going to win Eva but he could only do so with Hans Sachs’ help. In Act III, with the younger and older Wagner together – Walther getting an interactive lesson in mastersinging from Hans Sachs -– it’s as if the values and foundations of German artistic pride are being thrashed out. And later, when the various guilds enter the Nuremberg courtroom overflowing with townsfolk in a magnificently directed scene, that Germanness comes to an immense celebration before Beckmesser is laughed at and dragged off as Walther and Eva are blissfully united.

In this, his third consecutive appearance as Hans Sachs since the production premiered in 2017, German baritone Michael Volle more than demonstrated how well equipped he is to handle the mountainous demands of the role. Eccentric and moody, Volle’s Sachs imparts much about Wagner, he never fails to look the part and the eloquence, heft and flexibility of his instrument enlivens the text without any loss of stamina through to the end of almost four and a half hours of music drama. 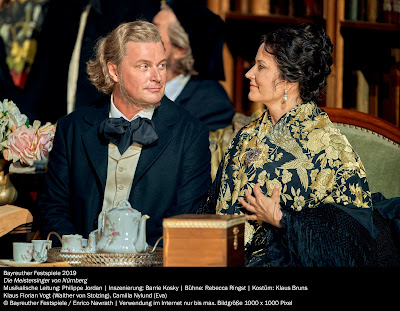 Also reprising his role as Walther, German Klaus Florian Vogt’s exuberance, youthful sunny tenor and agility on stage perfectly suits the young Wagner. Vogt’s performance didn’t go without issue as the top of the voice showed strain by the third act, most likely due to having sung the title role of Lohengrin the night before. Pearlescent soprano Camilla Nylund is a graceful presence as Eva, convincing in the love she has for Walther and the respectable tenderness she bears the older Sachs. The trusty, old-oak bass of Günther Groissböck resonates large as a sympathetic Veit Pogner. Rich and creamy mezzo-soprano Wiebke Lehmkuhl impresses with strong musical sensibility as Eva’s maid Magdalene, as does warm tenor Daniel Behle’s genial David. Most moving of all is characterful German baritone Johannes Martin Kränzle’s buffoon-like Beckmesser in once again withstanding the ridicule served on him to the extent that tears were shed for the injustice he receives.

The huge chorus of townsfolk do remarkable work with the action and comic gesturing that make up their parts. Vocally, they combine in beguiling precision to produce the finest pianissimos and majestic fortes with a range that utterly radiates. And leading the musical behemoth, conductor Philippe Jordan is back again with a persuasive account that shows obvious support for the singers and untiring awareness of carrying dramatic momentum.

Judge him as you like, but when the concluding splendiferous hymn to German art rings out, the courtroom has emptied, the walls have lifted and Sachs, as Wagner, begins to conduct an incoming raked stand of musicians and choristers, it’s a poignant and powerful moment that gives his music the firm and final say.